Two of Nor-Tech’s HPC cluster client research projects, the LIGO Gravitational Wave Observation and The IceCube Neutrino Study, were each awarded a Nobel Prize for Physics; LIGO in 2017 (announced last week) and IceCube in 2015. In awarding this year’s prize to The LIGO Gravitational Wave project, the Royal Swedish Academy called the project’s detection of the first gravitational wave, “a discovery that shook the world.” These waves were predicted by Albert Einstein more than 100 years ago but never directly seen until late 2015. The official announcement by the National Science Foundation (NSF) was Feb. 11, 2016. The IceCube Neutrino Observation project centers around a neutrino detector buried under 0.9 miles of ice at the South Pole. The ice provides a shelter from other types of radiation and particles that would otherwise interfere with the extremely rare instances when neutrinos interact with the detector. The project and ultimate observation of neutrinos was called “a fundamental step in unveiling the nature of the neutrino,” by the Nobel Prize committee. Nor-Tech continues to build technology for both Nobel Prize-winning projects. For more on these projects, read Nor-Tech’s case studies:
LIGO Gravitational Wave Observation
IceCube Neutrino Study MH-Nobel Prizes 10-12-17 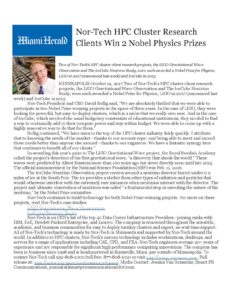