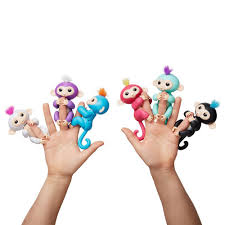 This,according to the following, from MIT Technology Review:
Call it the Software Grinch. Entrepreneurial resellers have been using bots to snaffle popular toys ahead of the Christmas rush, so that they can charge massively inflated prices to desperate parents.
If you have children of a certain age, chances are that Fingerlings—bright little animals that perch on your finger—are on their Christmas list. Too bad that Toys “R” Us, Walmart, and Target are all sold out online. Similar stories abound for other popular presents, including the Nintendo NES Classic Edition.
The problem isn’t, however, that other shoppers are more organized than you. Instead, you can blame the bots. The New York Times reports that software has been used to grab as many of the toys as possible, with sellers then relisting them on eBay and Amazon at heavy markups. The newspaper says it’s seen one Fingerling on sale for an astonishing $5,000.
Consumer Reports has a nice explainer on how the technique works. Entrepreneurial folks use software to continuously scrape retailer websites, finding new product listings seconds before they go on sale. Then, as soon as it can, the bot orders items, filling in things like payment details faster than a human ever could.
Where a human hand is required—to, say, defeat a captcha—tasks can be farmed out to remote workers via sites like Amazon’s Mechanical Turk. Oh, and the system also uses thousands of different IP addresses and hundreds of credit card credentials so as not to raise suspicion.
Retailers try to protect against these kinds of schemes by placing limits on how many products can be ordered at once and studying purchases for suspicious patterns. But it doesn’t seem to work. And while a Better Online Ticket Sales (BOTS) Act now outlaws these kinds of automated schemes for gobbling up tickets to concert or sporting events, no such law yet exists for the wider world of online retail.
In other words: good luck getting hold of that Fingerling.

HPC clusters, HPC Software for Christmas, Worst use of HPC