Looking for no cost, no strings test drive of AMD Milan? Look no further!  Nor-Tech’s demo cluster is also capable of benchmarking  hundreds of other applications including  Ansys Fluent and Dassault Abaqus. Every demo is finalized in a comprehensive results report.

From traditional application deployment to the latest innovations, AMD EPYC Milan processors deliver system resources and capacity that the most demanding applications require. AMD is constantly increasing its software optimization footprint to help ensure applications leverage all the innovations of AMD EPYC processors.

AMD EPYC 7003 series scale from 8 to 64 cores (or 16 to 128 threads per socket). No other x86 server processor achieves this level of core density. With AMD EPYC 7003, users get superior workload performance to deliver the resources their applications require.

AMD collaborates with major infrastructure and software vendors as well as the open-source community to help ensure applications and solutions are optimized to work exceptionally well with EPYC powered servers.

To find out more about Nor-Tech’s HPC technology integrated with AMD Milan, or to sign up for a demo, visit https://www.nor-tech.com/solutions/hpc/demo-cluster/amd-epyc or call 877-808-1010. 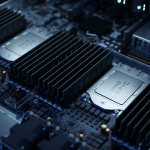